As an editor, he has been involved in the creation of successful Hungarian productions such as Something America, Control, Hungarian Wanderer, Toxicoma, and he also edited the 2nd part of Basic Instinct. We talked to István Király about his work, his profession and his journey so far.

Even as a child, he was very interested in technology, even though at that time there were only cassette players and VHS tapes and no video players in the home. It was a curiosity to find such things in the workplace.

But the son of his mother's friend worked in just such a special workplace: in the central recording room of Hungarian Television. At the age of 13, when he was about to choose a career, he asked to go for a "field test".

"The room had big 1 and 2-inch VCRs, and I got a great feeling when I walked in. It was like nothing we had ever seen at home, you couldn't stop or rewind the film, it just felt like magic," recalls Istvan. As a teenager, he fell in love with those machines and decided he wanted to work there when he grew up. With his sights set firmly set on this goal, after finishing high school, at the age of 18 he joined MTV's (Hungarian Public Television) central recording department, where he learned the basics, how the machines worked and he was even assigned minor technical tasks.

At that time (the late 90s), a technological innovation came along, the Sony BETACAM SP, a cassette-based professional editing system, which allowed you to edit in a completely different way. The earlier monstrous machines were unsuitable for proper editing. István and the younger people working with him helped the older workers to learn the tricks of electronic editing. It was a win-win situation: he mentored the "old guys" in the new tools and in return he was able to learn the spirit of editing. István did not learn editing in the classical sense of the word, i.e. in school, but learned the essence and logic on the job, in practice. At first he was given only small tasks and opportunities, but gradually, as he gained experience, he began to have his own ideas.

"I learnt a lot from Maria Fellegi anyway, she had her own programmes which she edited as well. One day, when Mari couldn't come in because of illness, she asked me to replace her. That's when I met Péter Bergendy: it's been a good 25 years now." They worked so well together with the director that Mari Fellegi gave the job to István.

In the beginning (1996-'97), he worked on commercials, video clips, portrait series and TV documentaries. This is how he became an editor. But it was not only his technical and theoretical knowledge that was honed during this time, but also his professional network of contacts. This is essential in this profession, which grew as he worked with more and more directors, with whom he has managed to build up a good working relationship and, in many cases, friendships that have lasted ever since.

Péter Bergendy, Béla Paczolay, Gábor Herendi, Gábor Rohonyi, Antal Nimród - he worked a lot with directors who have since gone on to make many successful films. 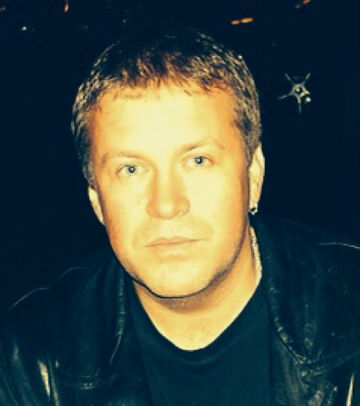 The turn of the millennium brought another technical innovation, with the switch to computer editing. Skyfilm Production, founded by Gábor Herendi, was the first to buy a computer with editing software in Hungary. This was, of course, a rather rudimentary tool by today's standards, it was not possible to finalise the film, but it was possible to learn the editing and its logic in a self-taught way.

"I already knew what I wanted, but didn't know how to do it," says István. I already had the theory of editing. With the linear editing of the past, you could only stack cuts one after the other, whereas with filmic, non-linear editing, you can handle the material much more freely. So István also learned computer editing in a completely self-taught way, and the new technique freed up not only time but also a lot of creative energy. It was much freer to tackle new film tasks, there were not as many specific technical constraints as before.

In 2001, he was involved as an editor for the first time in a feature film, Gábor Herendy's Something America. The film was a great success, and this initial success continued to accompany István: "for some reason I have been lucky in my work, almost always, the feature films I have worked on, even independently of me, have always had good audiences. It would be a bad feeling to work for a year on a film that only a few hundred people would see. But luckily that’s not what happened to me".

A few years ago, the number of requests to make commercials dropped significantly, the golden age is definitely over, and István sees this. In his experience, in contrast to other countries, advertising has become a young profession in our country: there are already many young creatives in agencies who find it harder to get along with older directors.

Commercial filmmaking is a service industry, where work has to be commissioned and done according to the client's needs. István agrees with many others that 20-25 years ago there were much better, more creative commercials than today: the old Vodafone series, the Westel 900 commercials, Pannon GSM (– telecommunication companies from the 90s in Hungary). They had more money and creativity: they could have had the commercials shot on film and graded them in Vienna, for example, to make them look really good. "Making a commercial is a complex job: in the best case, the client hires the agency, where they come up with something really good and make it. And the client trusts the agency they choose, who takes responsibility. Instead, what we have now is that everyone is afraid of everyone else, the client is getting involved in things they don't really know how to do, and everyone else is afraid to spend their budget elsewhere. It is rare for clients to have complete trust in the creators, but the reverse is more common: the profession has started to cater for incompetent clients. In addition, the special factor is missing in the current demands," says István, outlining the current state of advertising production.

He feels that it was good to finally move from commercials to feature films, where producers enjoy much more freedom. "When I joined MTV ( – Hungarian Public Television), I never dreamed of becoming a film editor, but I always thought it would be fun. Making a 30 second commercial is not the same genre as making a 2 hour film. It's a much bigger job to conceptualise, to see it through, to edit it. Plus, it's a profession of trust: directors are very attached to their established editors. The harmony and trust between director and editor is essential for the final result to be really good."

Spielberg, for example, worked with several cinematographers but never changed editors. The directors with whom Istvan started in the film business at the same time, and with whom he initially worked on commercials and clips, later took him with them on feature films, so he almost never had to go out to work. Of course, commercials paid better, so for a long time he worked in both genres.

Instinct and a good cut

But it wasn't only directors who took István with them on their newer and newer films, he owes one of the great international projects of his life to his friend and cinematographer Gyula Pados. Pados shot several films abroad as a cinematographer, including Part 2 of Basic Instinct in London. The film's regular editor was too busy to edit the premiere of the film, so he recommended István, and the director (Michael Caton-Jones) agreed. The mini trailer was so well done that István was asked to edit the whole film. He then worked with the director on 4-5 more films in London. Of course, foreign films were also affected by the pandemic and the isolation: many shoots stopped and didn't really find their way back, but he hopes to find such opportunities.

István says that an editor can have a unique style up to a point, but basically you have to serve the film, you have to find the editing that suits the film best: the best rhythm, the best images, the best acting moments.

"On average, a scene is shot 10 times, and then on the set the script editor marks which of the 10 was good, which the director liked. Most editors will pick the best of the 2-3 shots they've marked...I'll watch all ten and figure out how to make the best of that scene. I'm a professional at getting the best out of the scenes, I'm thorough, I can't rush or hurry," István concludes.

His editing style is always adapted to the film at hand, always finding the right cut for the genre.

In the studio, however, everything is separated from the raw footage, so the editor sees the footage on the monitor, as the viewer will see it, without any memories or moods from the shoot. But István is also involved in the post-production work, assisting the sound engineer and the colorist when necessary. And what does an editor do in his spare time? Watching a film! Netflix, Amazon, HBOmax - series, movies in large quantities. He's also professionally motivated, as it's useful to learn from other people's work, but he also often browses through viewer feedback.