Everyone in the business calls him the KUKLA. He even introduces himself on the phone like this and quickly adds that making a drawing of our conversation might be easier for him than talking about art. 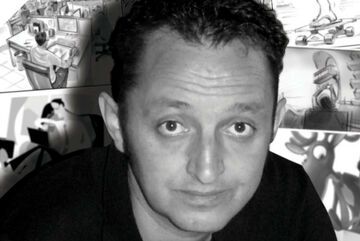 Everyone in the business calls him the KUKLA. He even introduces himself on the phone like this and quickly adds that making a drawing of our conversation might be easier for him than talking about art.

"The storyboard artist is nothing more than an interpreter. But he does not interpret between languages but translates the written text into an image, which from then on becomes international and understandable to everyone. But I can only put it this way now because when I first heard about storyboards in the early ’90s, I had no idea what it was,” - starts the graphic designer.

Erno Kukla became one of the most well-known storyboard artists in advertising fairly quickly. He's a graphic designer and animation director, according to his qualifications. He started his studies at István Csökény Art School in Szeged and graduated from the Hungarian Academy of Applied Arts. "I always liked to draw. In high school, I was mostly interested in cartoons. I got accepted to university on my first try, and I chose video as a minor to my animation major. "I owe my storyboard career to Tamás Sas, Who was my teacher in this particular department," - he tells me about the beginning.

The film director, cameraman, screenwriter, producer Sas, who, among other things, was the director of Presszó (Café), Kalózok (Pirates) and Rosszfiúk (Bad Guys), and he started a film company in the late '80s. He also did a series of commercials. When big international advertising companies arrived in Hungary, they quickly found each other. In addition to the textual scenarios, these big companies expected the storyboard from the directors, so this is how the profession took off in Hungary. But does he mind drawing a storyboard with his degree in animation filmmaking? "I could make and direct animated films, there are some examples, but you have to commit to your own films for months, and often years. Compared to that - in the golden years, in the nineties, when there was a lot of advertising done in Hungary –, there were days when two or three films landed on my desk every day. I was more interested in the invention of their pictorial representation. But I didn't just draw a picture screenplay for commercials. Thomas Sas's idea was to make an animated and live-action mixed-technique pilot from a novel of Jenő Rejtő, called Dirty Fred. I enjoyed that a lot, and it was a cool scene with a 3D background and live characters. A rather long storyboard was made for it, but unfortunately, it didn't turn out to be anything. But I'd be happy to show you what came out of that work. I do not consider myself an artist. I do not mind at all that what I do is an applied genre. This can be done very well too,” – says the graphic designer.

Soon, he worked for almost every self-respecting advertising agency, thanks to his legendary speed, among other things.

"The storyboard is hand-made. Of course, you can use digital techniques now, but I think it's not the details but the idea that counts. And of course the speed. And they demand speed because the storyboard artist gets the job at the last minute, just before shooting, and then he has to work immediately and fast. This is no time for art because the result will be the film itself. Some people don't think so, and they make the mistake of treating the images they draw as art, but it's not. The storyboard is an in-between genre, as a blueprint for a house that's about to be built, so everyone who works on the film has a good chance of seeing the same thing in front of them. A good storyboard artist needs to think in pictures, scenes, think, understand the director's and client's expectations, " - says the professional.

As he says, there are two kinds of storyboards. One of which is designed to make the customer understand what he's going to spend money on. These are more like comic books. It's more about the details, the glitter, than about the cinematic vision or dramaturgy. The other kind is when the artist is in his element, and it's called the director's board. They are working with the director, getting basic information about the location, the characters, and the story. “Based on the completed drawings, the director can now instruct the decorator, the costume designer, the cameraman and finally, the crew works together on the set based on them. There is also improvisation at the site, but a good director's board and the film are very much the same – we find out from the designer, and finally that – it would be nice to work in big films in the future”

A Day in Budapest - Summer Edition