Let’s take a look at Ridley Scott’s super production The Martian, and how they succeeded with location scouting in Hungary.

Scott’s recent filmography right before The Martian did not impress many. No one would argue that he is one of the most important directors of all time, but Exodus: Gods and Kings, The Counselor, Prometheus just did not had that same gravitas and mesmerising effect that his older works had (Blade Runner, Alien).

But for The Martian somehow the stars aligned, and critics as well as the audience loved it. The casting was brilliant: Matt Damon played the lead character, cosmonaut Mark Watney struggling for survival on Mars after a devastating sandstorm.

First it was suggested to shoot in the Austrialian Outback because of the red soil and rocks which could easily resemble to Mars. But that didn’t work out, so they decided to shoot most of the Martian sequences as interiors, giving them greater control of the environment, and then matching those with exteriors at Wadi Rum, Jordan.
This is how most of the production process took place in Hungary, the following locations: 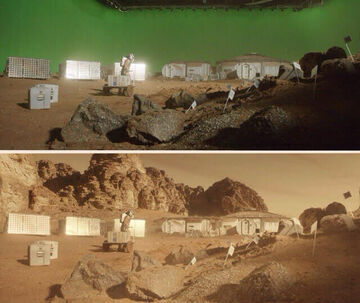 Production designer Arthur Max describes the building as “sophisticated, cutting-edge architecture on a world-class level. It’s a geodesic structure with enormous scale, loads of glass and concrete, and wonderful louvered blinds that open and close with motors. We can fully control the light levels. This building was a godsend. It would cost a fortune to construct a composite of sets like these on a soundstage.”

The additional exterior scenes were filmed in Wadi Rum, Jordan.
The Hungarian cast and crew can definitely be proud of themselves for making such an amazing, huge project happen which was also a commercial and professional success and a comeback in Scott’s carrier.
If you are interested in the film industry, want to explore the possibilities in production in Hungary, don’t hesitate to get in contact with me & Abroad Film.