“I didn’t particularly look for it, it just found me.“ - interview with Attila Horváth, founder and CEO of Abroad Films

Many of you have been shooting in either Hungary or Bulgaria before, but don’t know much about the local pros and locations. In this new interview series on the Abroad Films blog each month we will introduce an important member of the Hungarian and Bulgarian professional filmmaking scene, so you can get to know them, how they work and what they think about the industry. Of course, the first interviewee is none other than Attila Horváth, founder and CEO of Abroad Films.

What brought you to the film industry?

It all started with advertising. I didn’t particularly look for it, it just found me. When I was in college, we started out in event management then advertising. By the time I was 23, I founded my first company Nexus. This was in the late 90s. The first TV ad I created was for Panasonic for the Sydney Olympics because they were the broadcast sponsors of the event. It was a corporate image film, and it advertised their new product: the portable DVD player. Funny now, isn’t it? But we won 3 awards right away. This was the starting point of everything film-related in my career, and this was the starting point for my creative agency to specialise in TV ads and branded image films.

What was the next milestone in your career?

My agency merged with another agency which was one of the biggest players in the local market (Akció). We filmed twenty TV ads a year on average for both local and global clients - that was considered a huge number at the time in the Hungarian market, not many agencies had these many opportunities like we did. Global brands usually work with their global network-agency. T-Mobile Hungary was the first one to deviate from that and worked with a local agency - us.

It was so fast-paced but it was a great time to make use of all the knowledge I gathered thus far. I worked with all the notable directors and cinematographers at the time but I also gave opportunities to many aspiring young talent. We got to know each other very well since we worked so much together. I benefit from that broad network of talents to this day.

In 2010 we sold the agency and I started a new one on my own, HAB ad. Our main client was Aldi and we worked together for 8 years and made dozens of films each year, much more than in a regular brand collaboration. The overall number of TV ads I produced is well over 500, which is outstanding in this region.

How did the idea of Abroad Films come to you?

With 20+ years of experience in producing commercials and branded films, I already had an in-house production department at my agency. So it was an organic move to offer this service not just to my agency clients but to filmmakers and agency professionals from all over Europe: UK, France, the Netherlands, and so on. So I set up Abroad Films in London as a service production company with a focus on both feature and commercial productions.

I had no doubt that it would measure up with the Western competitors because of the vast talent we have across all fields of expertise. This is why I wanted to launch this interview series - to make local film experts more visible so our partners have a better understanding of the attitude and the work experience that filmmakers have here. This is such an important part of Abroad Films: the network of local professionals with international work experience. My first line producer in Hungary is Károly Fehér, who just recently worked with Aliexpress - he’s also been in the business for almost thirty years. Anatoli Netchev is the first line producer of Abroad Films in Bulgaria.

Why did you decide to include Bulgaria in the Abroad Films portfolio?

It was a pretty natural choice, to be honest. First of all: Bulgaria is even more cost-effective than Hungary. Hungary is significantly cheaper than the UK or France. Bulgaria’s prices are even lower than Hungary’s. That’s such a huge competitive advantage. Second of all: Bulgaria is a politically and economically stable country. There is no crisis (like in Ukraine), they are members of the EU, their currency is leva but it’s been pegged to the euro.

In terms of environment, Bulgaria and Hungary complement each other perfectly. Bulgaria’s natural landscapes are everything that Hungary doesn’t have: beautiful, long sea coasts, amazing high mountains (that are right next to the capital, Sofia). Hungary is more suitable for urban landscapes, historic downtowns. Nature is more like on the continental side: forests, fields, slopes. Combining the two, there is no shooting environment you can’t find in these countries.

Last but not least, both of these countries have studio spaces that just take your breath away: giant water tanks, high quality, enormous sound stages, and backlots.

What types of service production are there and what are the costs?

This is how I split it up. First, there is classic service production. This means all the things that are related to physical aspects of film production: camera rental, set design, art department, lighting, hairdressing, wardrobe, casting, extras, etc. This is where we have the most competitive advantage because Hungary and Bulgaria are significantly cheaper than the Western countries: a shooting day costs around £35-50.000 which is something impossible to pull off in England or France.

This can be extended to “service plus”, which means that the production wants to work with local talents such as DOP and director. Especially during COVID-times, this is becoming more popular. Hungarian and Bulgarian DOP’s and directors are becoming more popular: Marcell Rév was the cinematographer of the highly acclaimed HBO show Euphoria, and his new feature has already been bought by Netflix. Kornél Mundruczó just came out with Pieces of a Woman on Netflix which is a star-filled (Vanessa Kirby, Ellen Burstyn) drama produced by Martin Scorsese. This is where we sometimes hit a wall because added value comes into play, and the partners are not trusting local talent enough that it will provide that same quality as their own directors or DOP’s would. I am here to say: they are capable of doing that and so much more! Their talent and accomplishments are less visible on the global scale but it doesn’t mean it’s not there.

The third part of service production is hospitality. This is the fun part: both Hungary and Bulgaria - and their capitals, Budapest and Sofia - have such phenomenal, high-quality tourism. It’s so rewarding to show filmmakers around downtown, bring them to cool restaurants (many don’t know, but in Budapest, there are the most Michelin-starred restaurants in the region) and hip bars.

Sadly, there is not much showing around right now. Instead, we are doing remote shooting. It’s not so fun, but I think with all the things going on right now, this practice will stay with us for a while. 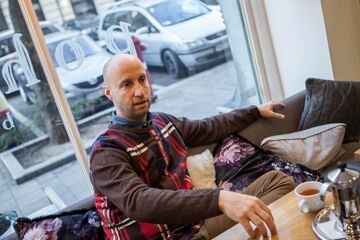 Is there significance in the fact that Hungary has a very long and rich film history?

Absolutely. Eastern Europe is loved for its cost-effectiveness, but it’s not just that we are good at. Eastern European countries especially Hungary have such a rich history with film and film education that makes it possible to hire local talent (DOP’s, directors) for international projects because the level is comparable to the UK or the Netherlands. 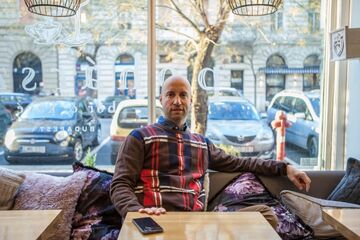 Absolutely loving it here. I and my family have lived in London since 2018. I have been visiting the country since the 90s and I became an Anglophile right away. The country’s history, traditions, and culture made a really big impression on me.

Also worth mentioning that London made me fall in love with Arsenal!

My favourite movie of all time is The Godfather I-II (don’t laugh!). But I would be so honoured if I had the chance to work with Scorsese, Milos Forman or Ridley Scott. Their minds fascinate me.

Next in the interview series: Anatoli Netchev, line producer of Abroad Films