The most exciting stories are the true ones. A more interesting story than what actually happened is not necessary. But one thing is: somebody who finds it, lifts it off the ground and tells us the story. Film director Viktor Pacsorsz's pockets are full of such true stories.

Cola spilt in the synth

A real story of regime-change era Hungary: in 1993, Viktor's film career started thanks to a bottle of cola, as the soda spilt into the keys of the Yamaha Sy-77 synthesizer. At the time, they were playing music with their friends in a band named AB Ovo Direkt, a synth-pop formation. The band was pretty much hampered by the broken synthesizer. Janos Csábi repaired it at the Yamaha service, but it took even longer at the time than it does today: without a circuit diagram available for download on the internet, they started a regular correspondence with the Yamaha branch in Vienna to get a technical description for the machine. Although the band did not survive more than 4 performances with the repaired instrument, during the three-month assembly struggle, Viktor and John became friends. Viktor, who was studying electrical engineering at the time, and John, who had similar interests, were immediately on the same wavelength. It was Jani who drew the attention of his friend to the new Macintosh computer with which you could edit digitally. The business started so well that the two friends founded a company with a demonstration studio, where they also offered the machines for sale with expert advice.

The big shift in career was when at a professional exhibition film director Gábor Herend came up to them and threw them the ball: he would need an easy-to-carry editing machine for commercials, which can be moved to filming locations. This is where the gears started turning in Viktor's head. They put together a machine that was rudimentary in today's eyes but revolutionary at the time. They ordered parts and descriptions from the USA, with the help of which they created the machine in 6 months. The finished device was so well done that Gábor Herend happily bought it from the inventors. The operation, however, was another act: the tool was not at hand for editors used to cut tape, so Viktor offered his expertise along with the machine. That's how he got a permanent role in the film director's staff, and from then on, he was there for every commercial shoot as a field editor. "That's how I got close to the fire. This meant two to three shooting days a week during the most labour-intensive period. I learned a lot about the profession from a close but still very comfortable position. In addition, I gained professional knowledge: I was able to work with the best directors and cinematographers, visual and costume designers, sound engineers” - recalls Viktor from the beginning.

I know that too!

Thanks to the hands-on experience, the possibility inevitably arose in Viktor's head that in a given situation, he would have done things differently in the director's place. "My work was practically done by cutting and putting the scenes together. I felt that if I wanted something different if I wanted more influence on a film, I simply had to be the director. My first solo job was a TV show for Nickelodeon, where I could implement my ideas with my computer in a pretty spectacular way. From there came further orders to make commercials (Kalinka, Panasonic, The Lottery). With these, we started winning awards. So I managed to make my mark as a commercial filmmaker,” says Viktor.

From advertising to documentary

In addition to the fact that Viktor and his editing kit could be contracted, he also maintained an apartment studio. Here "fell in" an invitation to make a historical magazine show titled 'Múlt-Kor'. It was not as much of a challenge from a technical or editing point of view, but the topics and the medium brought a completely new colour to Viktor's professional life.

"We made materials that I was proud to show to anyone because we worked on very interesting historical topics: from women mixing arsenic poison in the 1920s to drug addicts in the '80s and Kadar's (Hungarian communist leader) interpreter. We presented incredible fates and life paths in the magazine of the Hungarian space explorer who has made a career at NASA. We also interviewed the love of the tragic beauty queen Csilla Molnár, Károly Futács”.

From here, the filmmaker dates his departure to the world of documentaries. The next stages of which are Baleo, baleo! (2005); Whales and whalers in Indonesia (2004); Rabbi Fates in Hungary (2016) and the most recent, The Greek heart of Budapest (2021). He was inspired to deal with meaningful topics even though, as a schoolboy, he was not particularly fond of history lessons, he admits. After seeing rare archival footage, such as the complete record of the signing of the Treaty of Trianon and the deployment of the first tank, he turned his attention to exciting and special historical events. He became more and more focused on these stories to tell, of which he has even more: Manno Miltiades, the top scorer of the first and second Hungarian football championships, a record holder in various sports and an artist-polyhistor, or his plan about famous Hungarian automotive engineers and inventors. But he didn't stop there. He also wondered what it would be like to portray Buddha in his human reality in a feature film, or the adventurous life of László Bíró, the inventor of the ballpoint pen. He simply sees in them an exciting story that he can share with others. If he hears about a person, reads a book, the machine starts turning in his head. 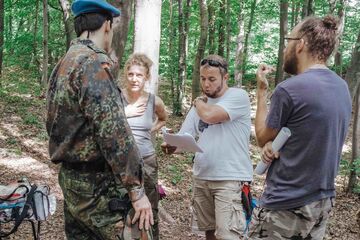 Behind the Scenes at the shooting of The Rabbit Trap

The first short film by Viktor Pacsorasz is not entirely based on an idea from thin air. The Rabbit Trap, starring Eszter Földes, takes place on the Hungarian-Croatian border and draws attention to landmines installed there, which are dangerous to this day. Viktor pre-models the films to be shot, with the precision of an engineer: "When I had it in my head or on paper I already knew that it would be 175 cuts and 20 minutes. If you search for The Rabbit Trap on Youtube, it’s a 20-minute and 3-second movie. I prepare my professional affairs quite precisely. With my eyes closed, I already see the whole film from the script. My editing routine is a big help.”

He is currently editing Erika Kapronczai's documentary about the tragic painter Kim Corbisier, who was also known in Hungary as an actor in addition to his painting career. It is a strange coincidence that Viktor and Erika applied at the same time to the University of Theatre and Film Arts. Ildikó Enyedi only accepted Erika to her class. "I can see from your written application that you already know everything, so you will get bored in class, you will not come and then we will fire you," Viktor recalled laughing at his unsuccessful application. "Then we shot a documentary about the story of my grandparents and my parents' peers, about the integration of refugees from the Greek civil war who arrived in Hungary. With countless ideas and many concrete plans, Viktor Pacsorasz will not be bored in the coming years. In addition to professional plans, he already has a strict A-plan for his "retirement": to go to Greece, where his father, Mihalis is from.