A Hungarian short film’s road to the Oscars

Kristóf Deák’s short film, Sing won the category’s trophy at the 2017 Oscars ceremony (yes, it was that year with mixed up envelopes). Anyway, it was full of ‘firsts’: this was the first time that a Hungarian film has been awarded in this category, and it was the director’s first nomination and first short film also. Let’s break down how this film’s special road led to winning the prestigious award.

About the short film – shortly

Kristóf Deák’s film is about a little girl (Dorka Gáspárfalvi) who goes to a new school and everything is fine at first. She becomes friends with a girl (Dorottya Hais) and joins the school’s famous children’s choir. But it soon turns out that the choir leader teacher (Zsófia Szamosi) uses a special method to prevent false voices from slipping into the performances, so that the girls come up with something and confront the teacher who is abusing her power. 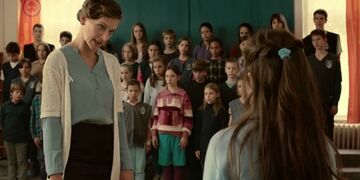 How it all started

The 25-minute Sing’s official budget was ten million forints (28 000 euros, mainly from the National Media and Infocommunications Authority) and they finished in six shooting days in 2014.The budget was completed with a couple of thousand euros by Deák himself and the film’s production company Meteor.

The short films come close to the Oscars in a very different way than the works competing in the category of foreign language films, where each country can nominate. In the case of short films, either a major film festival must be won, or the given work must be screened in a Los Angeles cinema for a whole week, Sing came to the attention of the American Film Academy by winning two important festivals:

Possible advantages and disadvantages in the eyes of the Academy

The secret of his success was in part that he filmed a positive story, which explored the harms of excessive competition and the theme is especially relevant in the US after the 2016 presidential election.
However, the length of the short film (25 minutes is considered long in this category) and the quantity of the dialogues were putting the film against the odds.

Deák consciously prepared the way for his short film to the Oscars. Deák and Anna Udvardy – the movie’s producer – nominated Sing not only for the well-known A-category, but also for several other Oscar-qualifying festivals, which eventually won the grand prize at the Chicago Children’s Festival.

After these two big festival wins the movie became eligible for an Oscar nomination. When it turned out that Sing was on the shortlist (the top ten in the category), they were approached by the Hungarian National Film Fund to support the marketing costs. By showing a twenty percent deductible, they received 1.4 million forints for PR and communication, from which they hired a public relations firm so the film could reach as many people as possible. London Flair PR was also the previous year’s short film winner’s PR firm, a matter of prestige for them to be able to help, so they undertook to advertise at a friendly price. In addition to their commission, the film’s new website, DVDs, brochures and a little Facebook campaign fit into the budget. Deák made tons of interviews, many reviews of the film were published and they also organized many screenings.
Sing was the press favorite that year, even the Hollywood Reporter declared that it should win – but this doesn’t necessarily mean that it will.

After all it was worth it because in 2017, the film won the Oscar for Best Live Action Short Film at the 89th Academy Awards. After receiving the Oscar, Kristóf Deák toasted to Emma Stone, befriended Brie Larson, and gave Salma Hayek some good advice.