It all started somewhere with his grandfather who was a cinema engineer in Dunabogdány. It was here that Béla Marafkó, Bálint's father, fell in love with the world of cinema and then passed on his passion for film and theatre to his son. This passion eventually turned into a profession and today Bálint is one of the most sought-after lighting directors.

It all started somewhere with his grandfather who was a cinema engineer in Dunabogdány. It was here that Béla Marafkó, Bálint's father, fell in love with the world of cinema and then passed on his passion for film and theatre to his son. This passion eventually turned into a profession and today Bálint is one of the most sought-after lighting directors.

His father came from Dunabogdány to Budapest, straight to the Hungarian Public Television, where he was appointed as the main lighting director in her first major feature film, The Nameless City, by Éva Zsurzs. After that he made many films and video clips. Thanks to this, Bálint's childhood was largely spent under the spell of Hungarian Television: from Christmas celebrations, through holidays and often everyday life, making television a natural medium. There was a lot of "company" solidarity back then, they built each other's houses and helped each other out in whatever way they could during the hurdles of the '80s and '90s. Bálint's professional history can also be traced back to around this time. After graduating from the high school of electrical engineering, he spent five years at MTV (Hungarian Public Television), where he worked for his father: the filming of the series Cimbora camps and Kisváros, and the 1986-87 Interpop festival in Siofok were the places where he worked during the summer. He lost his father in 1997 - painfully early - at the age of 21. After the funeral, however, something surprising happened for Bálint: he was offered a job as a contractor by MTV, which he accepted after some thought.

He saw the offer as a great opportunity from the start, but it was not easy to cope with her father's legacy. To be a lighting professional, then and now, you need a professional qualification. Bálint had it with the High Voltage Technical School, because at that time it was not possible to study to become a general lighting technician. Some people worked as lighting technicians with a 'normal' electrician's qualification. So he started working as a contractor at MTV, and many of his colleagues who knew and loved his father took him under their wing. The coordinator - he did not understand why at the time - always assigned him to difficult jobs, but he now considers that it was to his advantage, as it was on these tasks that he learned the basics of the profession. When asked what these difficult tasks were, the answer is succinct: "lots of lamps, lots of carrying". After a year and a half, in 1998, the launch of commercial channels opened up new opportunities for the young professional. At first, he worked only at night for TV2, but soon he changed and, as a self-employed entrepreneur, he was involved in the lighting of the exterior of the RTL Klub daily series "Between Friends" as a lighting technician.

Although he was already a sought-after lighting technician, when the HSC, the Hungarian Society of Cinematographers, started a training course in lighting, he was happy to learn. "Although I have never been asked to have a certificate, I have learned a lot of film and art history that has both shaken me up and made me step back from the lighting work I had done before." What he learned in practice, he also gained a theoretical knowledge that made him more open and receptive, and he saw productions with a different eye, but also with a different eye from cinematographers and directors. He worked with cinematographer Gábor Halász - whom he still considers his mentor - for 8 years on "Between Friends", and in 2008 he worked with Halász as a main lighting designer on András Szőke's film Bakkermann, with his own team. Today, "like the musician with the score, I can see the lighting of the scene on the set. That's why I love doing it, because it's as diverse and varied as the world of music, it's simply unforgettable," says the professional, who has trained on daily series, talk shows, theatre performances, live concerts, video clips and commercials, and who today finds it difficult to be a real spectator in a cinema, theatre or even just sitting in front of the TV. "It has to be a very good film or theatre piece that, when I watch it, I'm so captivated that I don't notice the lighting flaws." 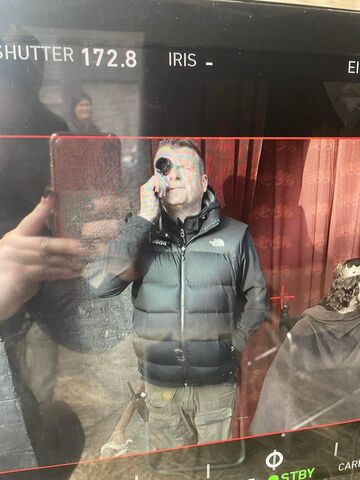 After the commercials, feature film service work also started in Hungary - with München by Steven Spielberg and Hellboy - Bálint says that the first generation of lighting directors was dispersed: some chose film, others stayed with television, while others went to the theatres. He considers himself mostly a television producer, but he also tried his hand at feature film super-productions, because he was curious to see how the mainly American crews worked. The crew had their own lighting crew, working from precise, pre-drawn plans, and at first the Hungarian lighting crew were just 'walking tools' in these big international productions. But in the last few decades we have proved that Hungarian professionals are also excellent, they speak good English and now they only bring in one or two senior people from abroad." So today, they have full confidence in local professionals, who are not only cheaper, but can do anything with minimal equipment.

The place of the lighting director in the system

No theatrical production or film crew - be it a television programme, feature film or commercial - should be without a lighting team. The director is the leader of the theatre crew, but there is closer collaboration between him and the set designer and lighting designer than on a film set. The director is also at the top of the shooting hierarchy, and his right-hand man is the assistant director. The right hand of the cinematographer, who is in charge of the visuals, is the lighting director, and the cameraman relies on him and his team of camera operators. In a film, the visual world is determined by the chief cinematographer, who has to bring all the technical departments together. The lighting supervisor starts work with the cameraman at the time of the technical fieldwork. If the shoot is not in the studio, Bálint takes notes during the scouting session: where the sun shines at different times of the day, what the lighting conditions are and what kind of light is needed for the scene. This is discussed with the cameraman and on the basis of this, the lighting plan is put together and the costs of purchasing the lights are worked out. At the beginning, Bálint "only" contributed his expertise to a production, because he felt that coming to a production without any equipment, on a purely professional basis, also meant freedom. Bringing a crew and knowledge to a lighting project is quite different from lending both lights and equipment to a project. But after a while, Bálint also started to buy his own technical equipment so that he didn't have to compromise and now, in the interests of both himself and the production, he uses 70-80% of his own equipment for lighting, leaving the production team to buy the remaining 20-30%.

Lighting is a man's profession, because you have to carry and lift heavy lamps during the often 10-12 hour shooting days, but recently more and more women are working in the profession and applying for the training where Bálint teaches. Nowadays, he is not only part of the profession as a lighting director, but also introduces future professionals to the wonderful and mysterious world of lights at the HSC Staff School. "I try to pass on the knowledge and experience I have gained over the years to the next generation." In his classes, you can learn the basics, as it takes years of practice to become an independent lighting technician. "But apart from technical knowledge, the most important thing is to shape the students' taste and open them up to the world, and to find the beauty in everything, because there is beauty in every task. I still find the challenge in new tasks, which keeps every job exciting".